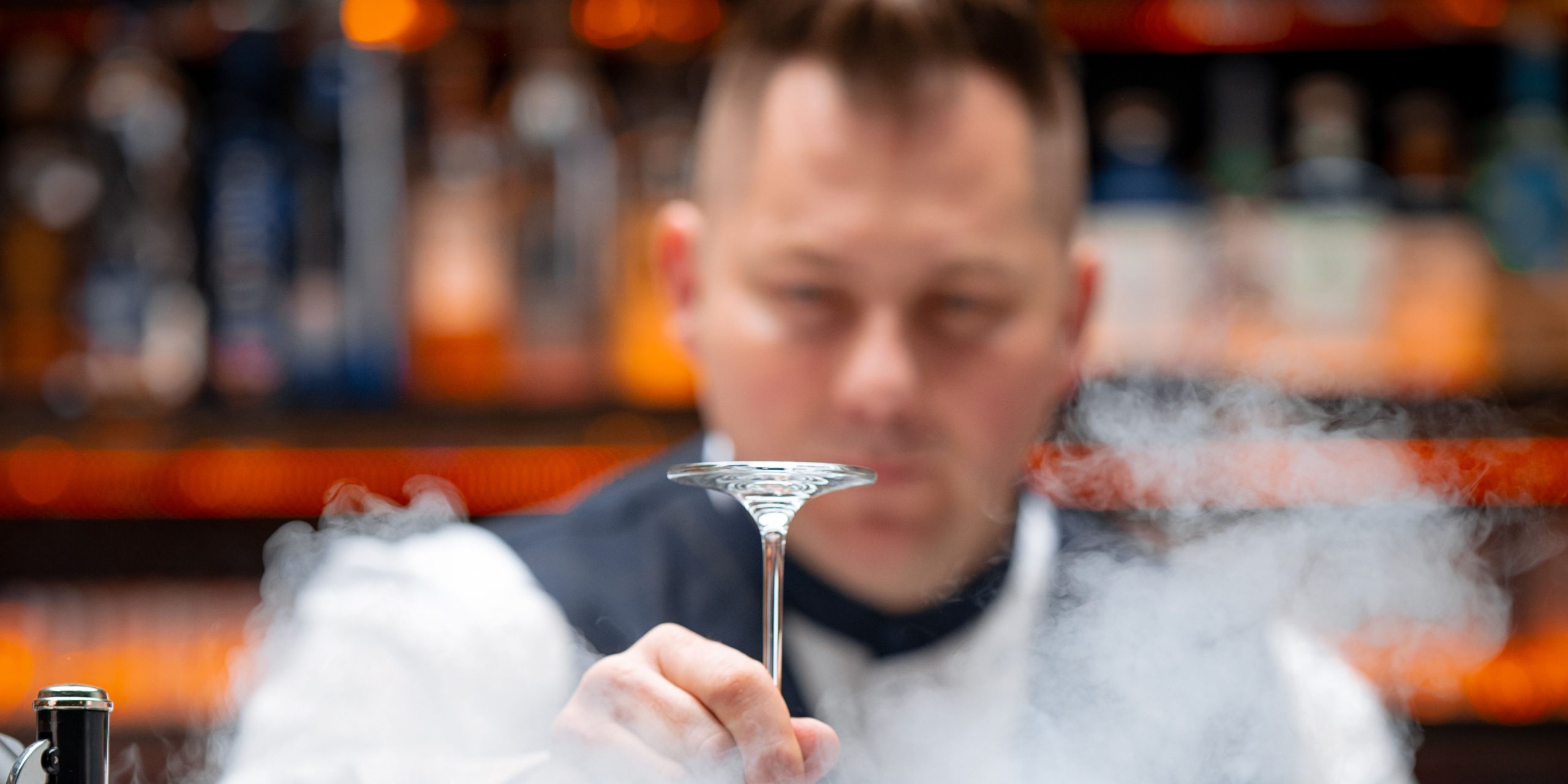 The craft cocktail scene in Ireland is growing.

10 years ago, options were more than limited for people to experience what the renaissance of cocktail culture had to offer, even in major cities like Dublin. Travelling to London or New York was common for people looking for high end cocktail and craft cocktail culture.

However when the cocktail wave really boomed in Ireland, it boomed hard. Now the offerings that people can expect in the big Irish cities are the highest level they’ve ever been, and Ireland has finally been put on the map for cocktail experiences, shedding the traditional garment of ‘pub only’ culture, to become a beautiful blend of both.

Despite the earthquake of the pandemic that shifted the tectonics of the bar industry worldwide, new cocktail bars are opening consistently in Ireland, each one pushing a unique concept and adding depth to the Irish cocktail culture.

We sat down with Ariel Sanecki, Bar Director for a new restaurant and bar called Hilliards in Killarney, Kerry. Having moved on from leading the bar at Adare Manor, one of Ireland’s top hotels bedecked with awards for best bar experience, cocktails and more, this new bar project promises an exciting new step in the right direction for Irish cocktails and another much needed stone in the path to global recognition for Irish craft cocktails.

From Breakfast Waiter to World Champion

Ariel started, like so many of us, a waiter that was enthralled by the siren song of beautiful cocktails. After attending a variety of bartending courses he was allowed behind the bar to start making drinks instead of just serving them and from there his love story with cocktails began.

Every time I went for a cocktail competition I spent between €200 – €400 depending on the competition, just for glasses, for equipment, sometimes I’d use costumes as well. Hard work, hard work, passion. I always try to improve myself and make something ‘wow’.

In 2016 I went to the World Cocktail Competition in Japan, and I won the Silver Medal. I felt that ‘I need to get the Gold one’. It took me two years and in 2018 I went to Estonia and I won the Gold Medal for Ireland. I don’t have a big ego like ‘I’m the best’, but for me this was something ‘wow’. I was originally a breakfast waiter and I became the World Champion.”

Ireland Is Catching Up Fast

According to Ariel, the difference between the last decade and now in the Irish drink scene is enormous.

From beer, wine and Gin and Tonic purists to cocktail quaffers, drinking culture has shifted so far from where it was. Where drinks have been very gendered in Ireland in the past, that divide is also dissolving in the face of great drinks.

“Please don’t forget in 2010 when I started working behind the bar there was only Bombay Gin, Cork Dry Gin and Gordons. After 12 years we have thousands of gins, thousands of beers, thousands of  everything. Many bartenders come back from different countries with knowledge and the guys start to make very good cocktails.

For example the cocktail competition at the Bar Academy a few days ago. There was so many good bartenders there. I remember years ago when I was there, there was maybe 5 good bartenders, now it was minimum 20 good bartenders. Many people with better knowledge, and these guys teach normal people. Everything’s changing. After 10 years I think that it will be something, maybe not like London, but people will have even more knowledge.

I had these four guys.. big guys with tattoos, no hair, really scary guys, and the guys ordered Sex On The Beach, Mojitos, Piña Coladas. Normally these guys would drink Guinness but now they drink cocktails.”

Taking Craft Cocktails To The Countryside

The hubs of cocktail culture in Ireland have always been the major cities like Dublin, with a few exceptions in more countryside and coastal locations. Times have changed, especially with the pandemic giving people a taste of countryside living when they moved home and out of the cities.

Now top Irish bartenders like Ariel are taking their skills into new places and spreading cocktail culture where it didn’t exist before, at least not at the level that Ariel maintains.

“You have good cocktail bars in Cork, in Dublin, but you didn’t have them in Killarney. In my opinion Killarney is the heart of Ireland. It’s a beautiful place.

For Hilliard’s, the concept was of course, good looking, nice, tasty cocktails and of course using the local products. Most of the cocktails have an Irish product.

Hilliard’s was a store before. The guys made the china, they made the clothes, the buttons, everything. We have many small things, like in the Mr Biggins we have the small chocolate button, in the Ina In China we have a teacup, small details that look amazing.

In the future I’m still going to make the same type of cocktails, but more pretty and again with the small touch of the Hilliard’s store. I love the presentation and I love selling the experience to the guests.

We don’t save any money on drinks. We make all the sugar syrups like the Strawberry Sugar Syrup. I’m using 10kg of fresh strawberries, sugar and lapsang-souchong tea and put in a sous-vide for two hours. The process is very long and very expensive. The quality is amazing. Of course I can buy the syrup from different suppliers but that’s not the point.

Without the team, no matter how good you are, you never can get any success. Without the boys I’d never win anything. And of course the owners, the owners support you and that’s very important.”

Crafting Cocktails For The Irish Palate

While the cocktail scene and the Irish palate have developed rapidly over the last decade, the molecular mixology and esoteric flavours that some of the major cocktail hubs put out might still be a little too extreme to be successful on the island.

Instead, Ariel’s mission in Hilliard’s has to create advanced twists on the popular classics, incorporating mixology and craft into drinks that are levels above their original counterparts, but with enough recognisable flavours to be approachable.

“I asked, ‘Which way should we go? Should we go somewhere crazy, which is really very hard to understand from the people’s point of view, something like London style, or should we just make nice, good, tasty easy cocktails that are pretty’.

We don’t have any difficult flavours. We have things like baked pear cider sugar syrup and… wild mead, rhubarb cordial and cranberry bitters. Most people know these names.

Minimalism Is Not Enough Craic

Around the world, as we’ve heard in previous interviews, minimalism is making a big comeback. Whether it’s returning to the classics, or demystifying mixology, minimalism is all the rage.

Big, fancy garnishes are being replaced with elegant and unobtrusive zests or dehydrated fruit, and glassware is getting simpler by the serve.

While the storm-front of this trend is also hitting Ireland, Ariel believes that it’s missing something that’s essential to the Irish customer: the wow-factor.

“Most bartenders make cocktails for bartenders, not the people.

Of course you have different bars like the Dead Rabbit where the guys don’t use any garnish, some people use the minimal garnishes like a walnut. But I still believe that it’s about making elegant and pretty cocktails. That’s the key. The glass is very important, the ice is very important, the colour of the drink is important… and a small touch, something ‘wow’. When you bring the cocktail the person is like, ‘oh my god that’s something amazing’.

The Future In Batches & Waste-less Cocktails

It’s hard to predict trends when the landscape of cocktails and hospitality can shift so quickly. Minimalism and a return to the classics is pretty clear to see happening around the world, and molecular mixology appears to be losing steam, but who knows what the next big thing will be?

“The problem now is with the prices going up. The big thing now is making, from the waste from the food and everything… cocktails from zero. Something like super juice, 700 litres from four limes, or the green flowers from the strawberry, you can make a cordial from that. You can make something from nothing, I think that’s the way the world is going.