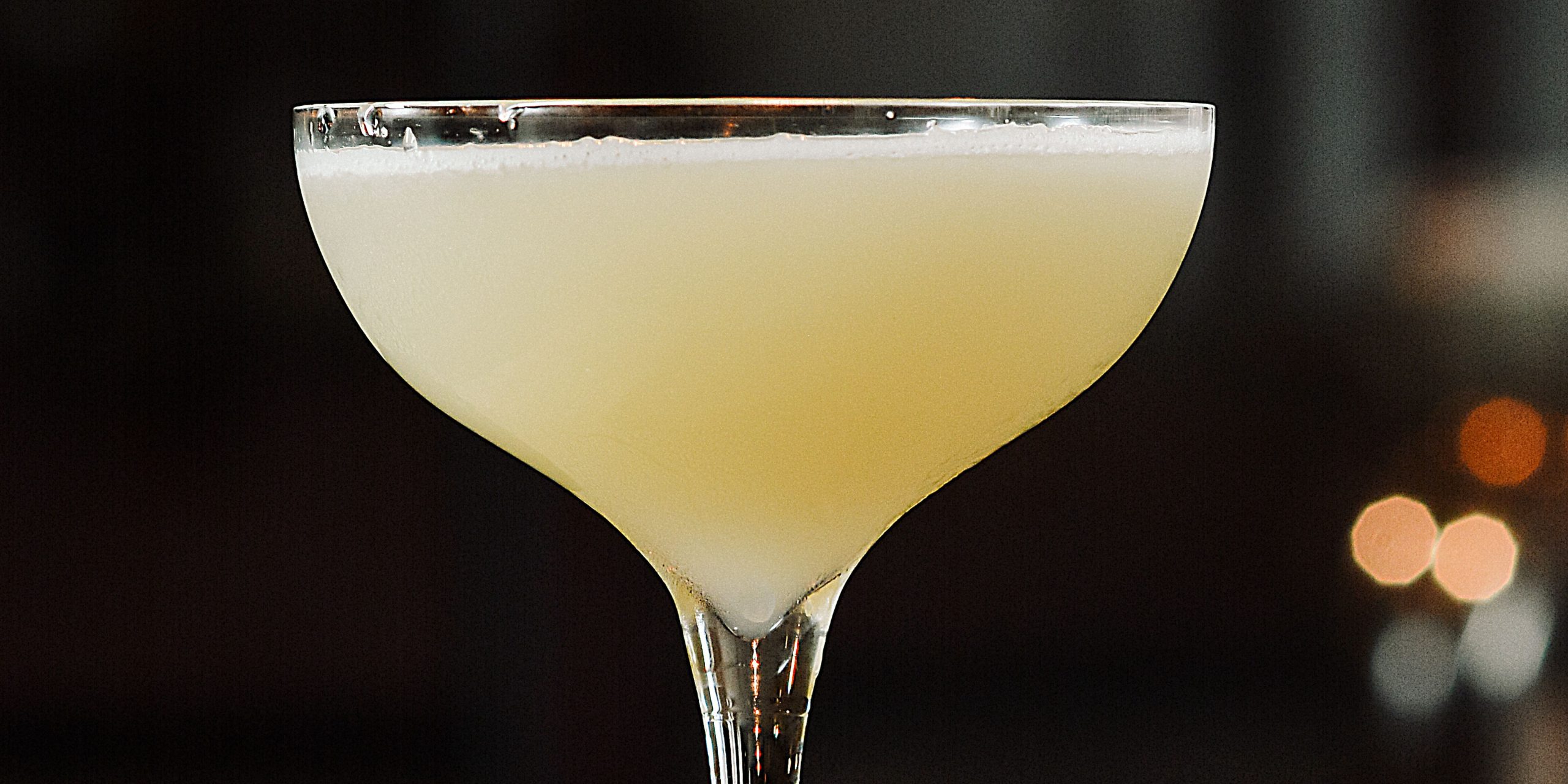 The wonderful world of cocktails is vast and varied. There are literally thousands of cocktail recipes out there, with more and more being created with every new craft bar and every new menu.

It’s impossible to keep up with all the cocktails in cocktail culture. We always recommend to new students in our Drink In Academies bartender courses that they know the ‘foundational’ cocktails. These are the classic cocktails that are the progenitors of many if not most of the cocktails out there.

These are the cocktails that we teach on our Become A Bartender course, our 2-Week introduction to bartending that takes place in the Drink In Academy: Dublin.

If you’re familiar with these recipes, how to make them and where they come from, you’ll have a great foundation to explore and learn even more recipes.

The Daiquiri is one of the most significant cocktails in cocktail culture. The reason for this is the inherent balance of flavours that makes the Daiquiri work. It is a ‘sour’ cocktail, and maybe the most iconic of the Sour family, excluding maybe the Whiskey Sour.

The Tom Collins is another member of the Sour family, following a similar template as the Daiquiri, however it is in a different category of drinks altogether. Collins drinks are ‘stretched’ or ‘long’ drinks. Usually they are stretched with soda but are flexible to all sorts of mixers. The reason the Collins are so important is that they define ‘refreshing’. It is a cocktail designed to be sipped on summer days or act as a easy yet flavourful palate cleanser among other, heavier cocktails.

By taking this template of ‘a sour stretched with bubbles’, a whole range of cocktail opportunities open up. Take for example the Air Mail, a Daiquiri stretched with champagne. The Collins is also flexible to different spirits and different sweeteners for more complex expressions.

Also known as the original ‘Whiskey Cocktail’, the Old Fashioned is an essential for any bartender’s repertoire. Like the Daiquiri, this cocktail is an expression of balance and harmony of ingredients. It’s also a very controversial cocktail in how it is prepared. Many call for an ‘authentic’ approach, using the traditional soda water and sugar cube, while some note that sugar syrup is, for all intents and purposes, the same thing and saves time.

Cocktail culture is often said to have begun on ships during the Naval Age. The Dark & Stormy is a truly perfect example of this. Like the Grog and the Gimlet, this is a true pirate cocktail that has stood the test of time. It and its Russian cousin, the Moscow Mule, are the most notorious of the Buck/Mule family of drinks. Bucks or Mules mostly consist of spirit, citrus and ginger beer, making them very simple and very easy to make cocktails.

The reason the Dark & Stormy has made the list here is because it is also incredibly easy to drink and enjoy. Rare is the person that doesn’t like a ginger beer cocktail. Also the spirit is softened perfectly by the citrus and ginger beer, which suits the majority of new or less experienced drinkers. We call it a ‘house-party’ drink for that very reason.

The Queen of the tequila cocktails, the Margarita has gone through so many ups and downs across its lifetime, from heights of inclusion on the best menus in the world to lows of ending up frozen in a slushie machine. Nowadays the Margarita has made a huge comeback, riding the waves of the ‘homemade cocktail revolution’ and the agave spirits boom for the last few years. Margarita literally translates to ‘daisy’ in Spanish, which is fitting as it is the most famous of the Daisy family of cocktails. Daisies are cocktails consisting of spirit, liqueur (usually orange), citrus and sweetener.

From our experience, Daisies are some of the most easily enjoyed cocktails that maintain a decently high level of complexity. The Margarita’s English cousin, the White Lady, is one that we have always used to convince non-gin drinkers to rethink their perspective, for example. Tequila is often considered too harsh in its flavours for many, but the Margarita allows the tequila to shine while providing a zesty base that dampens some of the more vegetal agave notes. Knowing how to make a good Margarita is also the most effective way to gain the respect of a seasoned tequila drinker.

Name a more iconic cocktail than the Dry Martini… We’ll wait. The Martini is one of the most notorious cocktails, not only within cocktail culture but pop culture as well. There are literally hundreds of variations of the Dry Martini, from Dirty to Gibson, Naked to Perfect. No matter the Martini drinker, a well made Dry Martini always goes down smooth. The secret to the Dry Martini recipe is in the vermouth. ‘Dry’ here refers to the amount of sweetness imparted by the vermouth, the less sweetness the ‘drier’ the Martini.

There are a lot of jokes about Martini drinkers just wanting a double shot of vodka or gin whilst still seeming classy, and while there is a nugget of truth there, the thing that makes Martinis unique is how delicate and refined they can make the strong, spirited character of the gin or vodka. The fastest way to the heart of an older American drinker is also a well made Martini.

Just remember the golden rule of Martinis: two isn’t enough, but three is far too many!

Arguably a ‘modern’ classic, the Espresso Martini is one of the most popular cocktails in the world. Not only is it a great pick me up on a night out, it’s also a highly effective ‘after-dinner’ or ‘dessert’ style cocktail. Due to the high level of demand for Espresso Martinis, it will usually crop up on most menus in some shape or form, knowing how to make a good one is therefore essential.

Quality Espresso Martinis are all about 2 main things: the coffee and the shake. Using good quality coffee with some form of crema (the orange-brown foam on the surface of good coffee) allows for that iconic foamy head that is part of the reason the cocktail is so popular. However crema or none, it all goes to waste if the shake isn’t hard enough. A hard shake properly aerates the crema, without it the drink looks boring and flat.

A final thing to note about Espresso Martinis is they are very easily customisable. For example if someone prefers their coffee black with no sugar, you might leave out the sugar syrup. Or if someone likes milky coffees you might include some Baileys, or a splash of milk. That being said if you stick to the recipe below you’ll be in for a good chance they’ll go down a treat!

The Negroni, the three ingredient gatekeeper to a world of bitter flavours. Despite its deceptively ‘fruity’ red colour, the Negroni is for most an acquired taste, as it hinges around bitterness as its primary flavour, which is still a relatively uncommon practice in a world where sweet and sour still reign supreme.

Much like the Aperol Spritz, this cocktail is a source of great pride for Italy, where it was born, and is an important one to have in your cocktail arsenal. Despite being just three ingredients, it offers serious complexity and varies wildly according to which gin, vermouth and amaro are used. The measures are also not considered hugely important, rather the equal parts of each ingredient is the key to a balanced Negroni.

Although the Negroni is distinctly bitter and incredibly spirited, as a pure alcohol cocktail, it has still soared into the world’s Top 10 cocktails, in large part due to the profound love for the drink that bartenders have. A final note on the Negroni is that garnishing with an orange slice is the ‘traditional’ way, and you risk a look of amused disgust should you serve it with an orange zest to an Italian.

If Tiki Culture had a mascot, it would be a difficult pick between the Zombie and the Mai Tai. We chose the Zombie for this list because in many ways it perfectly captures what Tiki is all about, big flavours, lots of rum and lots of juice. Tiki cocktails tend to be the most deceptively drinkable, with serious amounts of spirit that are masked by the syrups, citrus and juices, allowing the alcohol to sneak up on you. The Zombie itself got the name because having a few would make you walk like a zombie if you weren’t prepared. In the first bar it was served in, the limit was 2 per person, for safety’s sake.

The recipe for the cocktail has been argued about by tiki enthusiasts since its conception, and there isn’t really any one agreed upon list of ingredients. The safest bet is: use all the rums you have, a bunch of different juices, bitters and syrups and shake it hard. We’ve given our go to recipe for a more tropical approach to the drink, with pineapple and coconut, however in some you will see more of a lean towards citrus flavours, or far more alcoholic varieties. Regardless, having one Zombie recipe up your sleeve is a quick way to get the party started.

The Mojito is a cocktail that will never go out of style. When people think of refreshing, summertime drinks, the Mojito is almost always at the forefront. It’s also a perfect example of how using fresh herbs in a cocktail can have a major impact on flavour and look. The Mojito is such an important cocktail to understand and know how to make, because achieving quality is all about the process, and it’s easy to do wrong.

The most important thing for good Mojitos is fresh ingredients and following the method. The cocktail can only really achieve its true potential by using good limes and fresh mint, taking care to truly squeeze all the juice and oils from the lime and to delicately extract the aromatics of the mint without breaking the leaves and releasing the bitter chlorophyll contained within.

The Mojito, like the Old Fashioned, is also subject to debate around whether or not granulated sugar or sugar syrup should be used, once again we fall on the side of sugar syrup for this one.

The smell of fresh mint sparks joy in most people, making the good Mojito a strong weapon for any bartender to have.

So there you have it, our list of cocktails we think any bartender or cocktail lover needs to know. Many of these cocktails are foundational cocktails that form the base idea for many other classics, modern or otherwise.

By mastering these 10 cocktails you’ll have at least one recipe that suits anyones flavour preferences. You’ll also be able to twist each cocktail in so many different ways, by knowing these 10 you actually know over 100, just by changing or adding one or two ingredients.

If you want to practice making these drinks, learn all about the spirits and products that make them and gain the experience you need to start working in the bar, our bartender courses at our Drink In Academy: Dublin are what you’re looking for!