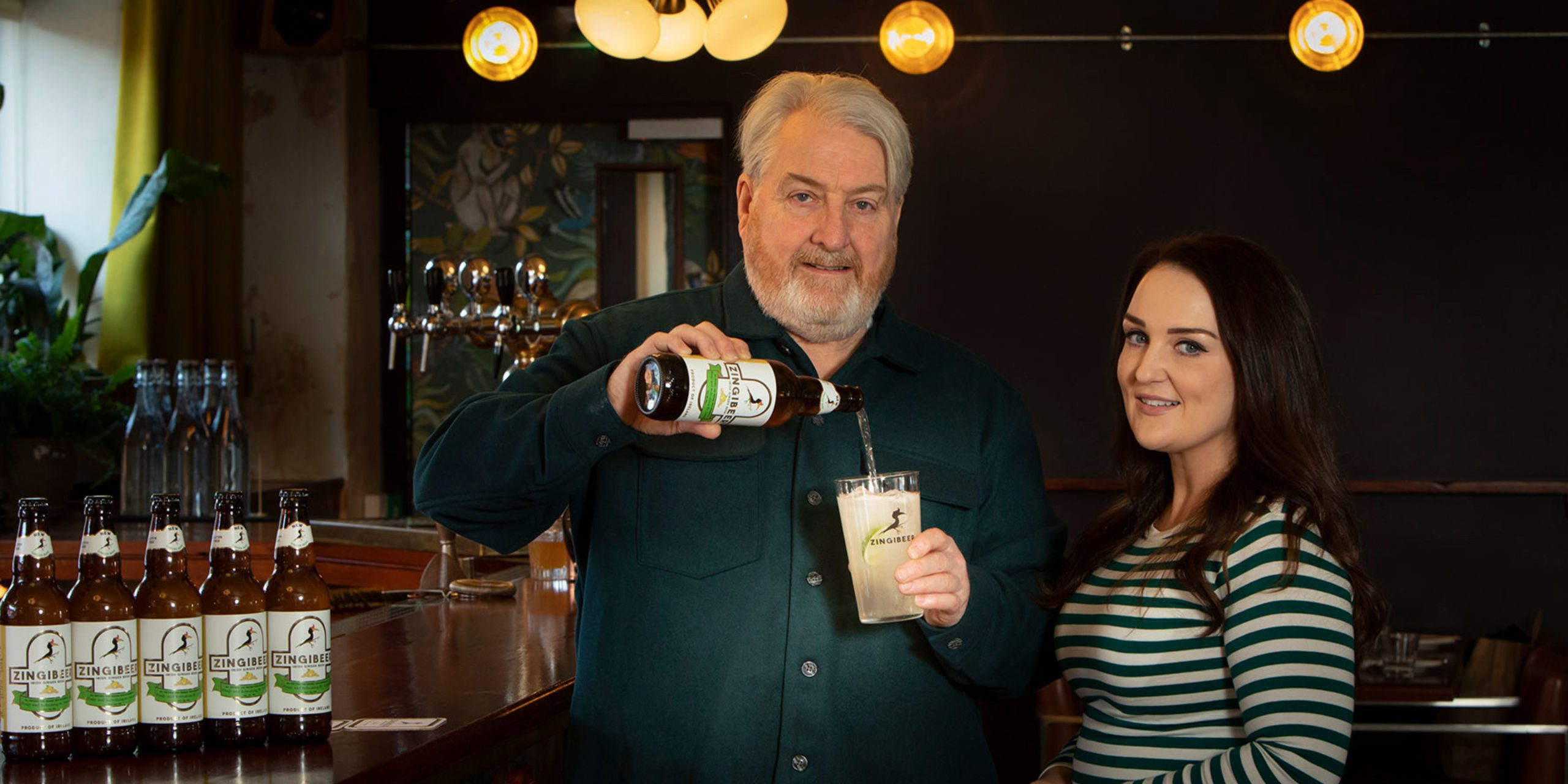 New kid on the block – Zingibeer, is making waves in the Irish ginger beer market. We sat down with one of the founders, Rachel Byrne, to discuss how to achieve success in a narrow market, why the Irish palate is primed to love ginger beer and how she’s planning to scale up her family business.

The traditional pint pouring is being shaken up in Ireland.

It used to be that you had two main options: beer or cider. Now there’s a third player, and one that’s getting tapped up faster than you can say ‘ginger beer’.

Zingibeer is the new game in town. We’ve got a special relationship with the two founders, Rachel and Kevin Byrne, who are working on the new brewery we’re opening soon in our Dublin Academy.

Alcoholic ginger beer is nothing new, in fact it’s been around since the 1700s. The English are the most notable producers, but Zingibeer is the first Irish alcoholic ginger beer on the market, and it’s making waves after just a year on shelves and on tap.

While the brand has experienced great success in the Irish market, it hasn’t come without its challenges. We sat down with Rachel Byrne, cofounder of Zingibeer, to find out about the journey from concept to up-and-coming business, how to play in a UK dominated market and what make ginger beer such a unique product for pouring.

“Ginger beer was something that I always felt like I should like. But anything that was on the market already fell short of my taste expectations. We wanted to take the essence of what they’re doing and make it better. We really wanted it to be super natural and to taste and look like it didn’t have any additives.

R&D was about 6 months. Batch after batch. It must have been 50-60 batches, some drinkable some not drinkable some super fizzy ones, some little bombs in bottles with exploding caps. There was a lot of trial and error.

We wanted to get a crowd pleaser. We were like ‘what’s that perfect balance between sweetness, ginger and refreshing?’ We got there in the end!”

Brands can spend months and months going back and forth on brandification. For Rachel, two quick Google searches and they had the perfect fit.

“The name Zingibeer wrote itself. The plant that ginger is the root of is called zingiber officinale so all I did is add an E and we have Zingibeer. It captures that zinginess in the taste. It ties in so well with the origins of ginger.

We loved the idea of having an animal on the bottle. The ginger that we use is in our Zingibeer is from Malaysia. The bird on the label is the national bird of Malaysia called the Rhino Hornbill. He’s really quirky and he has that cool curve in his beak. I was like ‘that’s the guy’.”

If you didn’t know already, Irish people really like Irish stuff. Buying local and supporting irish producers is all the rage at the moment. The enthusiasm in Dublin for a Dublin-made product, and around the country for an Irish-made ginger beer is infectious.

“The support we’ve gotten around Dublin 7 is amazing, I think we’re pouring in almost every Dublin 7 bar. I think it really appeals to the Irish palate. It’s the lemon zest. I don’t think other ginger beers use lemon zest, or certainly not to taste. I think an Irish palate loves that lemon-refreshing feel to it.

I think the timing has been good for us. People are far more focused on local products made in Ireland. If you can get a product that’s made in Ireland rather than import them it seems like a no-brainer.”

What’s The Difference Between Beer And A Ginger Beer?

“I always start by saying what it’s not. It’s not beer that’s been flavoured with ginger. There’s no hops in it so it’s not technically a beer. It’s made using fermented ginger, lemon, botanicals, and then of course sugar and yeast.

Instead of using a standard brewers yeast, we use a champagne yeast. What you get is a more sophisticated sort of a mouthfeel. It’s less beer-y. The champagne yeast naturally carbonates the product so it gets a really nice level of carbonation.”

One of the strongest selling points for Zingibeer is that it’s on draught. This fact alone is shaking up the pint binary of Dublin, where beer and cider has reigned supreme and unchecked for many years. Who doesn’t like more options when the siren call of, “Pints?”, comes in.

Carving A Slice of A Narrow Pie

The alcoholic ginger beer market is dominated by two main players in Ireland, Crabbie’s and Fentiman’s. To break into the market, Rachel says, it’s been about boots on the ground, getting the bottles into hands and the pints onto tables to show the market it has a more local, and in her completely unbiased opinion, superior product.

“I think it’s all about tasting and about getting your products into peoples hands, getting as many people to taste it as possible. Getting into bars and getting people in to do tastings. There’s a lot of space to convert cider drinkers as well as ginger beer drinkers.

Also, trying to get our story out there as much as possible. It is a family business, it’s me and dad, it’s as authentic as you can get. In Ireland we love producer stories, we love to know who’s making this product, where it’s coming from.

If we can communicate that to people I think it’s going to really resonate. I think that’s going to be a really big part of what gets us a slice of the market. In 5 years time I would like Zingibeer to be the name-ask.”

Can You Replace Non-Alcoholic Ginger Beer For Cocktails?

“I personally had a wedding cocktail that was a Zingi Mule. It was vodka, fresh lime juice and Zingibeer and it was the best drink ever. I’ve used it in a Dark & Stormy as well, it was great.”

If you’re in Ireland and want to try Zingibeer for yourself, they’re in most independent off licences, O’Briens and SuperValus around Ireland in every county (you can find out which one’s on their website), and you can get them online at Craft Central! Also keep an eye out for the taps in the pubs because you’ll be seeing them more and more.