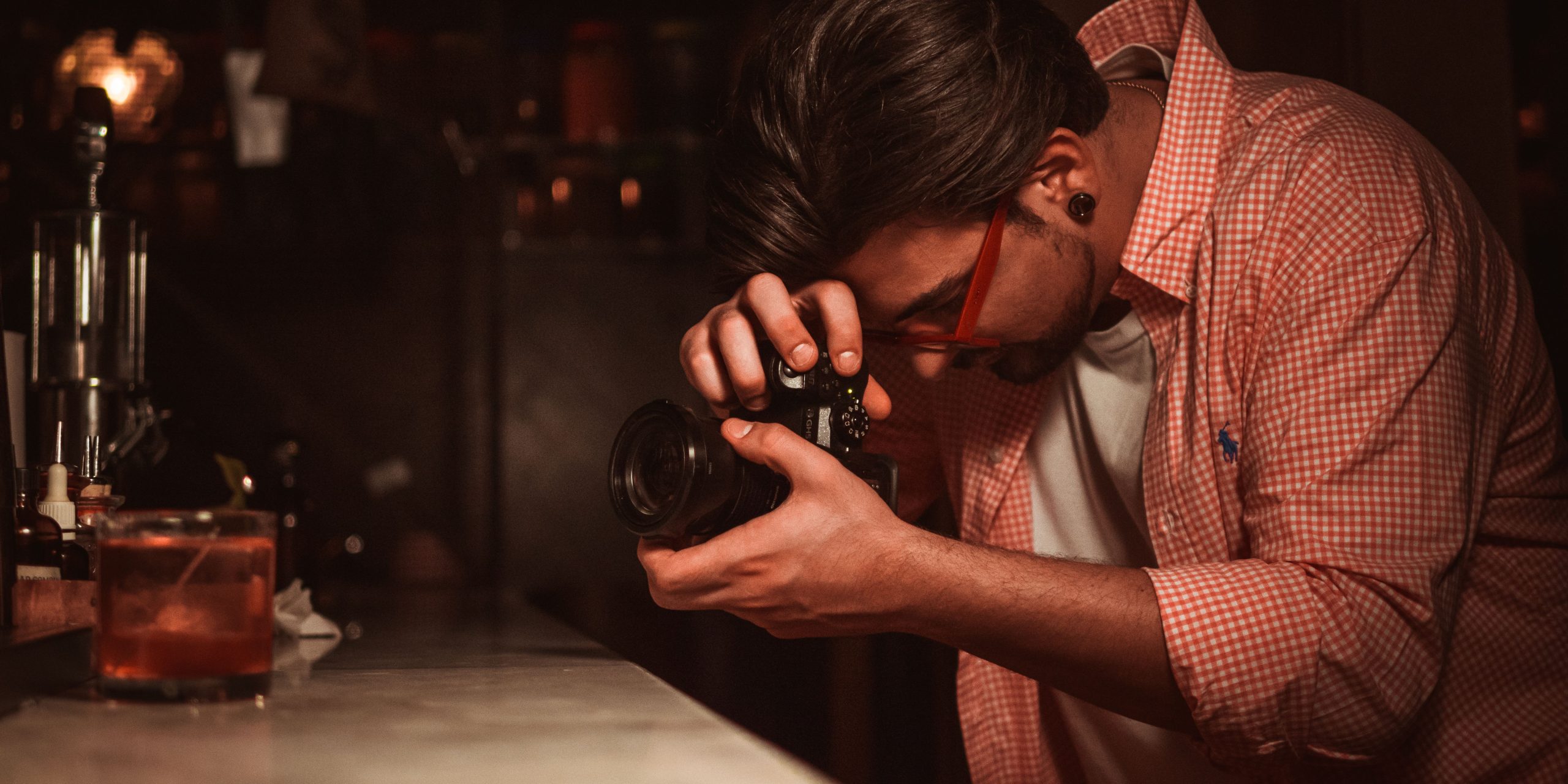 The drinks industry is full of opportunities, and not all of them can be found behind the bar. We chat to Fabio Ciccarelli, the Head of Digital at Drink In about his perspective on all the amazing places working behind the bar can take you.

There is this fallacy about hospitality work like bartending that it is somehow a ‘dead end’ job. This mostly comes from outside the industry and from people that naively think that anyone could work in hospitality, or that it’s an ‘easy’ job.

The truth of the matter is that hospitality is anything other than a dead end, in fact the routes to success through careers in the industry, be they in the industry, parallel to or outside it entirely, are many.

Our company, Drink In, is a perfect example of this fact. Everyone that works for the company was a bartender, chef, barista or sommelier at the beginning of their career. Now we’re a collection of teachers, social media managers, writers, photographers, videographers or business people.

One person in particular that stands out among us for their unique career path from bartending is Fabio Ciccarelli, the Head of Digital. He has been wrapped up in hospitality for the vast majority of his life, but in just three years since leaving the bar he has helped found a company, now runs an entire content creation team and has his short film about the industry being selected for film festivals. Suffice it to say he has made the transition from bartender to an entirely new but still closely related industry.

We sat down to discuss his perspective on what makes people seek other careers after bartending, routes to success inside and outside the drinks industry, as well as his advice for anyone looking to explore new jobs within the industry.

Burnout With A Capital B

Fabio, like many of us in hospitality, was born into a hospitality family. His uncle owned a popular cafe in his hometown of Avezzano, where he spent a lot of his time growing up, so being surrounded by busy servers and customers was ingrained into him from a young age.

It was this, and his brother’s career as a bartender that really pulled Fabio into the industry himself, starting as a waiter at 14 and later opting to skip the traditional university path until later in life and move to Dublin from Italy at 18 to begin work as a bartender in the prestigious Shelbourne Hotel and later at Peruke & Periwig.

After moving home to help open a bar with a friend of his back home in Avezzano, and moving to Madrid to work in Macera Bar, he found himself experiencing what many of us who have been facing down 10+ years in the industry… Burnout.

“The way I was embracing bartending wasn’t the right one. I famously don’t take care of myself in terms of eating healthy, I’m not a big sports guy. I work on the computer a lot so my day would be: waking up at 3pm, going to work at 5pm, coming back at 3 in the morning, working on the computer until 5 in the morning then going back to sleep. My day time didn’t really exist.

The key is balance. You need to understand when it’s time to stop having just fun and start building. Between the age of 18 and 23 I aged fifteen years, physically not mentally of course. Balance is definitely key to great cocktails and a great life.”

Many of us in the hospitality industry come to a point where we need to change. This can take many forms but there are three main ways to achieve that change. The first is staying on the frontlines of hospitality but changing roles or moving up to senior management, the second is moving to a role that is still in the drinks industry but in a different field, and finally there is leaving the industry altogether.

In bartending, almost everyone comes to this point, apart from a few unicorns that live and breathe being glued behind the bar. For Fabio, the pandemic had one major silver lining which was that it forced him to take a break and reassess his situation. He had always been an avid photographer and videographer, so moving into drinks content production was a natural next step with the lockdowns dragging on.

“Around bartending you can connect so many things. There are artists that work exclusively with drinks brands for example. If you do understand bartending then you definitely understand entertainment, you understand design, you have an eye for what’s beautiful and what’s not.

There are so many things in bartending that just taking one of those elements and expanding on it can lead to a new career. For example, design – start working on graphic design, or management – bartenders are already managers because you need to manage your station. Lots of brands will look at successful bartenders and pick them up because of these sorts of strengths.”

It’s an open secret that many of us in the hospitality industry start early and often skip formal education like university in favour of diving in and starting getting our careers rolling. This can lead to pretty heavy imposter syndrome when moving off the floor or out of the bar and into a different area of the industry.

The truth is though, that education doesn’t need to be formal, it just needs to be effective. Hospitality requires diverse skills that transfer well to other roles, so all it takes to succeed in them is passion for learning. Plus it helps to hone your other skills while you’re still working hospitality.

“To move within the industry you don’t need a qualification, you don’t even need to actually study, you need to be on top of what’s happening and with a bit of networking you can easily move to the next step. Lots of bar managers don’t have a business management degree, you don’t need it. You just need to understand the industry.

For jobs in different areas or industries, it’s education, not titles, that is important. Knowing your shit is key. Knowing what you’re talking about or at least being very interested and with the right attitude towards learning is key to moving forward.

Lots of bartenders don’t realise the massive opportunity to study and work on other stuff while they’re bartenders. You will see bartenders being amazing guitar players or pianists or cooks. Lots of bartenders are capable of doing something else professionally, so definitely learn a skill, and build a hobby while you’re working in the bar or on the floor.”

Stepping Back From The Bar Brings You Closer To It

Fabio, like most of us who have left the bar, still misses bartending. To him it was one of the most defining parts of his life that brought him out of his shell and into adulthood. When he started working outside of the bar he came to the realisation that he was less extroverted than he thought he was. Feeling like he was part of the community and part of a strong team made him feel invincible.

It can be scary to leave the bar because you might feel like you won’t have that connection anymore. In Fabio’s opinion though, you shouldn’t be afraid of losing touch with the bar industry or the drinks scene just because you’re not working directly on the front bar. In fact, it might actually be better in the long run for success in a different job in the drinks industry.

Once I got out from behind the counter my job allows me to travel a lot. I can actually see the industry from another perspective now that I’m not inside it as much. I can see what people call the best bars, I can see how trends apply differently in different countries. The best way to stay in touch with the industry is to travel as much as you can, and don’t just go to the ‘Best Bars’.”

Don’t Be Afraid To Start From Scratch

But with so many opportunities to use the skills you gain in hospitality to further your career and experience new parts of the drinks industry, according to Fabio if it’s time to jump then don’t just jump, leap!

“I knew I wanted to do content creation for years and I never took the step of trying. I got lucky because it came to me when I was 24, but I already knew that I wanted to do something like this.

My advice is to go for it, don’t make crazy, sudden decisions but see if you like it. You should just learn, your attitude should be about finding a space that will allow you to spend time with people while they work so you can check it out. In Avezzano there was this studio that allowed me to be there for a couple of years, and it was great because I could see people that were actually doing what I wanted to do.

At the beginning I had to bring coffees, sometimes I would make videos or go on photo shoots. In the end we shot two full cinema movies and my name was in the end credits, that was only thanks to the fact that I started by bringing coffees.

So if you want to move away from bartending don’t be scared of starting again from the beginning. It’s a new industry or it’s a new job and you need to start somewhere.”