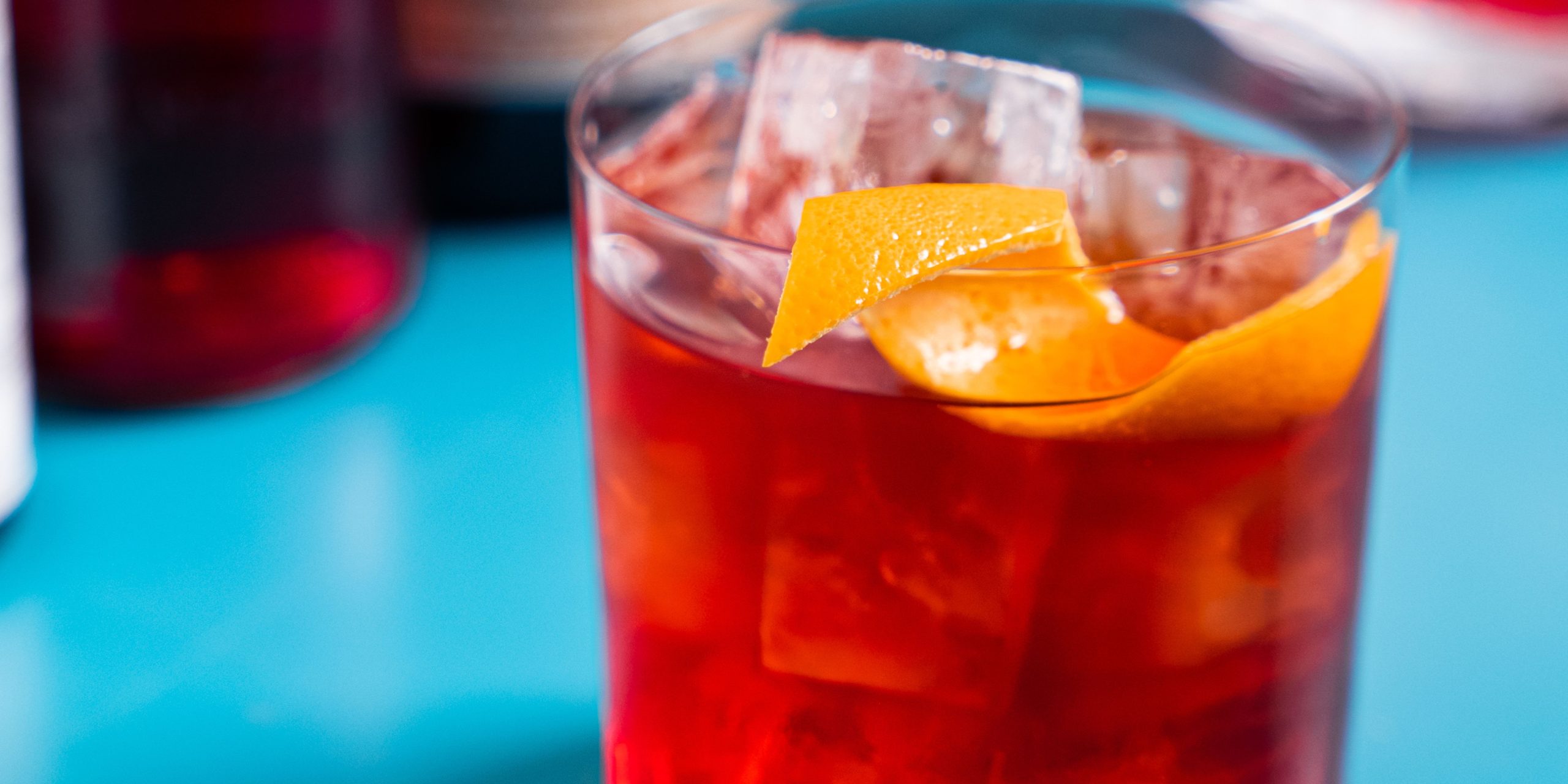 Introducing the Amari, a cocktail with all the makings of a modern classic cocktail, created by Iulian Voicu

It’s a grey, overcast day as I sit expectantly outside SOLE Seafood and Grill waiting to try what my boss told me is ‘a new modern classic’, which inspired the name of this series.

The person I’m there to interview is Iulian Voicu, an old industry friend of mine and long time Bar Manager at Drury Buildings, the most popular Dublin haunt for everyone on the Drink In team. He’s since left Drury’s and made his way up to Beverage Manager at SOLE, on the other side of the block.

You could always trust Iulian to make you something amazing in Drury’s (he made my first Mezcal Negroni for me back in 2018) and since he’s moved to SOLE he has access to even more fine wines and spirits, so expectation is high.

When he unlocks the big glass door embossed with brass I’m welcomed into a wide open space centred around a large, circular, wood-panelled bar with glass cabinets embedded, prominently displaying their seafood selections resting on beds of ice. The palate of the space is reminiscent of the food they serve: creams, browns and splashes of burnt orange, with exposed brick walls and arched support beams coated in mottled, worn paint. It’s an interesting aesthetic, one that is reminiscent of industrial Dublin. It makes a nice counterpoint to the elegant place settings, glassware and furniture.

Staff mill about getting ready to open. The proverbial calm before the storm. Having experienced it myself for years, it’s oddly comforting to watch it happen knowing I’ll be gone before the rush. Although I do feel slightly awkward about taking their Beverage Manager away for 30 minutes during prep time. Even more so when he starts making the cocktail that I’m here to see, while I sit at the bar.

The Amari is a dark rouge in its neat rocks glass. Its lack of pretentiousness is exactly what I expect from Iulian, a simple looking cocktail garnished with a quickly cut orange zest expressed once over the surface and placed neatly on the side. It looks a lot like a Negroni, but there is a darker tint that is noticeable.

The recipe is simple:

Stir and serve in a rocks glass with cubed ice. Garnish with an expressed orange zest.

I note the ingredients as he’s pouring them and expect an overwhelming amount of bitterness. As someone that loves bitter drinks I’m excited, but sceptical. The first sip is a wonderful surprise to my still waking up palate.

Yes, the bitterness is profound, but lighter than I had imagined and with a refreshing and clean sweetness that harmonises perfectly with the aromatic oils of the orange zest. It doesn’t kick in the same way a Negroni can and it’s certainly less cloying. The bitterness itself has more depth than its Milanese cousin, and is more earthen.

I can tell Iulian is watching me intently for my reaction. I think my delighted grin satisfies him and he noticeably relaxes. He leads me into their banquet room behind thick steel grey curtains, soft, cloud-covered light washing in through the skylight windows. We take our seats at the end of a long table with high backed chairs and perfectly set places already ready for service.

Iulian seems a little nervous. It’s a state I’ve never seen him in before, which if I’m honest helps relax my own nerves. I walk him through my interview process, he nods, I take a sip of the Amari and we begin.

So Iulian, how long have you been in the drinks industry?

Well I’ve basically been in the drinks industry since always, my parents own a little bar in my neighbourhood back home in Bucharest.

Even before they owned the bar, my father, while the house was being built, bought a tap, a couple of kegs CO2, everything. I was changing kegs, I knew everything, and when they opened the bar I was 11 and pouring shots. I was having the time of my life.

Cocktails I’ve been doing since I moved to Ireland 8 years ago.

How did you start with cocktails?

It was just passion. I found a job in the Burlington hotel, it was the Hilton at the time, and it was only classics, like frozen cocktails and everything like Mojitos, but that’s the start for everyone you know?

I just wanted to go to Drury Buildings as a bartender because I’ve seen that they do whatever they want creatively. The owner lets you be, you can do what you want, you can try things, you can experiment. I got my wings in Drury Buildings. I was there for 5 years. I left on the same day I started, 5 years later.

What was it like leaving Drury’s after 5 years and coming here to SOLE?

You went from Bar Manager in Drury Buildings to Beverage Manager. What’s the difference between those two roles?

First of all, what’s the difference between the two places? I’m handling much more wine here so I get to learn about wines as well and I see everything differently. People are ordering different drinks in a restaurant than a bar. They’re looking for palate cleansers. For example, they ask me for a cocktail between the starter and main, ‘I had oysters, I’m going to have steak now, what do you recommend so I forget about the oysters?’. Thirty percent of the menu is a palate cleanser.

I have a vodka fizz on the menu for example, with Belvedere vodka, Cointreau, elderflower, parsley & vanilla syrup, aquafaba and soda water.

What’s unique about SOLE’s menu? What direction are you taking their cocktails in?

We have a 6 course food menu, now we’re pairing it with the wine but I would like to give them the options to go with the cocktails as well. Because of that we need to make some wine cocktails. We have a couple of spritzes coming now and a few cocktails for June. Champagne cocktails are coming back anyway, I’m seeing champagne more and more.

Is making cocktails in fine dining different from other sorts of bars?

Everything has to be perfect and everything has to be the same. Even if you’re delivering 100 cocktails a day they need to look the same, the garnish needs to look the same, you need to keep the standards at the food level. If you fuck it up you’re going to ruin the experience, customers are going to forget about the service, all the great wine and great food that they had.

Let’s talk about your cocktail, the Amari, our first Modern Classic In The Making. How did this idea come about and how did you formulate the recipe?

I had the idea from my pins that I wear on my uniform. I first got the Angostura pin as a present from my friend Andrei Petrescu. I was like “I want that, I need that”. Then I was looking for a Negroni pin, because that’s my favourite drink. Nico from Drury Buildings wanted to get me a Negroni pin but he couldn’t find it, so he got me the Campari pin. I also have my Fernet Branca pin and I’ve been wearing the three at the same time. That’s all that any bartender needs. That’s how I came up with the Amari, I was like, “Jesus, I need to come up with a drink with this, I need to make it happen. It can work”.

I woke up with the recipe in my mind, I came into work, I made it happen. 45, 15, 3 dashes and a barspoon of sugar. I think it’s the first cocktail I’ve ever made that I didn’t have to change anything. I just loved it, it was perfect straight away. For me at least.

I googled it everywhere and didn’t find the combination of ingredients. It’s also very simple ingredients you can find in every bar so it was surprising that it hasn’t been done before.

Is that usually how your cocktail creation process works, in moments of inspiration?

I have so many ideas. I’m always writing because I never want to forget them. My last idea is a Fernet Branca reduction for example. Most of the time I’m coming straight to the bar. With at least half of the attempts I’m disappointed, not everything works obviously. I use bartenders and chefs to test my creations and also waiters and floor managers that have no clue about cocktails because in the end they’re the clientele. You need to find the balance between the bartenders and the normal people.

Bartenders are usually very cocky and don’t want to accept that the drink is good but it’s not for everybody and they’re like ‘no but it’s perfect’. It’s perfect for you, it’s perfect for me, but give it to Lady Mary, forty-five years old at the table, will she like it or not? No she won’t, most probably.  For example Vio who just came in, he hates Negronis and he tried the Amari and I knew it was a nice drink because he said, “It’s not bad”, which from a person who hates Negronis, that’s what you need.

What would you say defines the term ‘Modern Classic’?

Simplicity is also 100% a factor. Singapore Sling is one of the exceptions. Most of the modern classics, 9/10 they’ll be very simple and every bartender will be able to make it.

What do you think about some of the new popular trends like clarification?

I think it’s a bit rushed this process. People are going too fast too far, they don’t take the right steps. I didn’t go there yet, I tried a couple of times. People should take the baby steps, they should know the drinks better before they go into this level. They’re going to clarification and they’re bartenders for one year and they don’t know how to make plenty of drinks except how to clarify a Bloody Mary. I think it’s like a bubble. There will be bars which are doing it great and there are going to be places that realise, “this is not for us, let’s go back to what we know”.

Do you think Dublin is behind other big cities around the world in terms of its cocktail culture?

It’s behind but it’s also above other places. It’s better than Vienna for example but it’s way behind London, it’s way behind Barcelona. It’s growing very fast. In 10 years time we won’t recognise Dublin.

What advice would you give to bartenders that aspire to get to your level in the trade?

Patience. Patience and do your job. I never aimed to get to any level. I just enjoyed my job and it just happened. Be patient in your job, focus and if you do it right you’ll be rewarded.

What’s the most important lesson that you would teach a new bartender today?

Don’t panic. I see so many new bartenders panicking. Relax. You’ll have horrible shift, take it easy, take it docket by docket, customer by customer, at the end of the night you’re serving the same amount of people but if you did it without stress then you’ll enjoy your shift and you’ll make the other bartenders around you like you more and you’ll make them enjoy their shift as well.

What’s the best way to enjoy the Amari for everyone who is going to make it in the future?