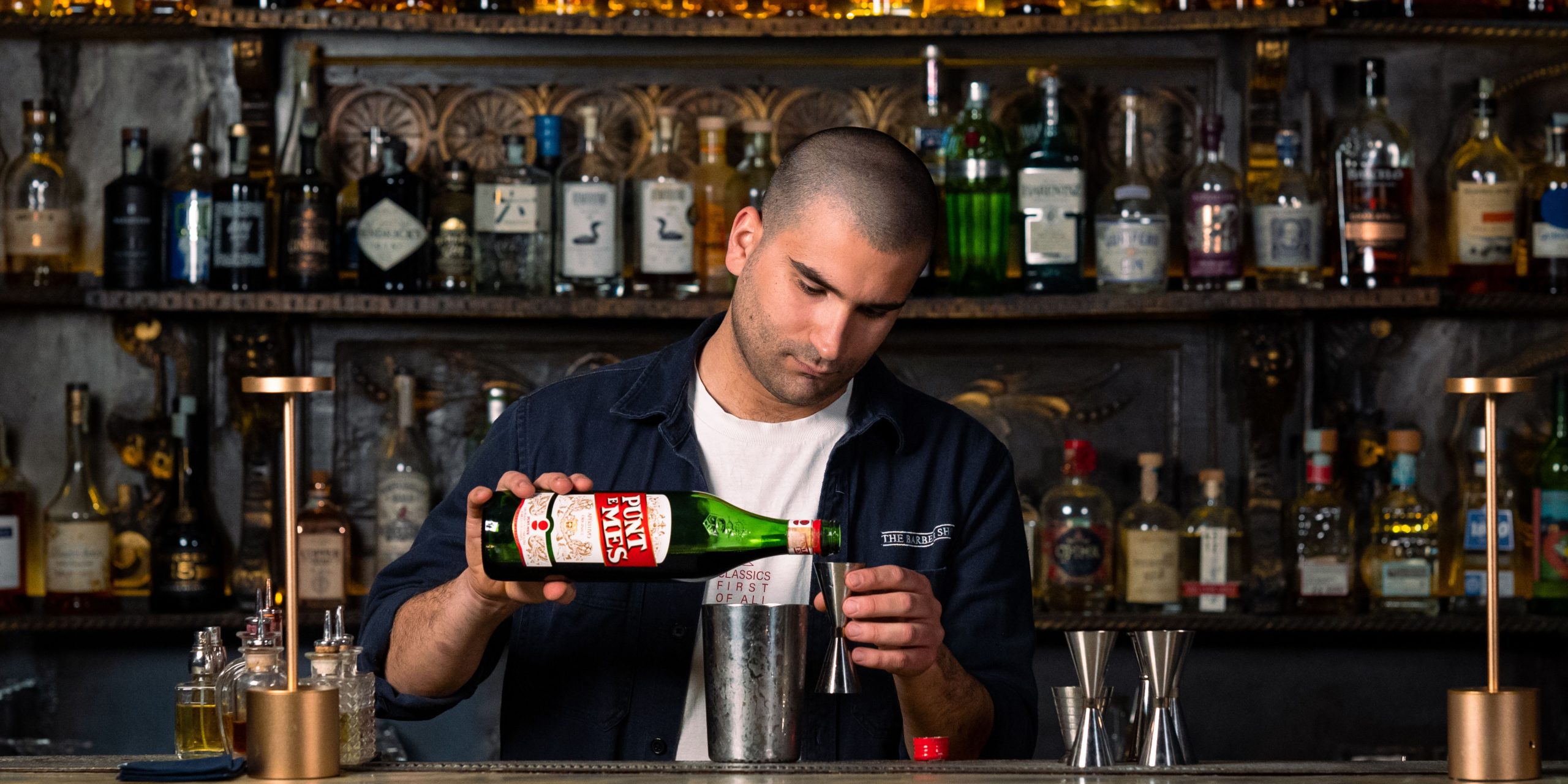 In a world of craft cocktails focusing on creating unique signature drinks, find out why one speakeasy bar in Rome is going back to the classics, championing the motto “Classics First Of All”.

Since the cocktail renaissance, cocktails have evolved. Each era of cocktails have had their own unique take on mixed drinks. Eventually, each era’s drinks become classics in the next generation. Currently we are living in an era of Craft Cocktails, where alchemy is the name of the game.

The core principal of the craft cocktail movement is complexity. Complexity of ingredients, complexity of flavour, complexity of preparation. Each bar is competing in the realm of ‘signature’ drinks, drinks that represent their own style or flavours. Within the bars, bartenders are designing drinks that express their individuality and flavour personality.

Cocktail culture has never seen such vast variety. This, in and of itself, is a wonderful thing for the bar industry, as each bar has a unique offering that keeps them competitive. At the same time though, there are rumblings within the industry that something is being lost. Modern cocktails, using advanced mixology techniques, are hard to make at home.

Here’s a telling example: during the cocktail revolution that happened over the Pandemic, we saw the rise of a new member to the bartending community, the home bartender. The number one cocktail these new bartenders were making at home? The Margarita. A classic that stems from anywhere between the 1930s and the 1940s (depending on who you ask).

Of course the Margarita is a timeless and popular classic. But in a world where people are starting to make drinks outside of the bar, current craft cocktail culture lacks one fundamental ingredient. Replicability.

We spoke to Roberto Maiuri, head bartender of The Barbershop Speakeasy, Rome, where their mission is to educate their customers on the importance of the classics and help turn the modern classics of the last few decades into the old-school classics of the future.

The Importance Of Knowing Where You Come From

Nowadays it’s easy to just dive straight into bartending. At least in Dublin, the job market is extremely open to newcomers as bars struggle to replace lost staff after the pandemic. Some of the best bars in Dublin are accepting new hires with little experience or background knowledge, where before they would have been very picky.

This is a double edged sword for the industry. It often means that bartenders are starting their career with a menu of signature cocktails and very little knowledge of the classics. Part of the reason Roberto is where he is today, in a bar that holds the classics in the highest regard, is because education and self-study have always been central to his passion for cocktails and bartending.

I started with a normal bartender course, but unfortunately in Italy when I started there were no schools where somebody taught you the stories of the cocktails, the history of cocktails. This was something I discovered later.

Then I discovered a world behind the stories of cocktails. I started with historical books, so Jerry Thomas, Harry Craddock, Harry Johnson. Then I started an important course for me, at the Innovational Program of the Jerry Thomas Speakeasy in Rome, which is the first speakeasy ever opened in Italy. I’ve studied every day since then.”

“Classics First Of All”

The concept of the Barbershop is an extremely strong dedication to the classics, old and modern. While signature cocktails are still part of the menu, they make up a much smaller percentage than the classics do.

Their motto is ‘classics first of all’. This, in large part, stems from the love that their owner, Joy Napolitano, has for the renaissance era and the industry legends that shaped it.

“Joy is a passionate bartender who worked a lot for many years in Rome, he worked out of Italy, and he fell in love with the concept of the Sasha Petraske’s Milk & Honey. He started to study all that stuff and work on customers when in Italy it was very, very hard to sell a Whiskey Sour.”

However, the ‘classics first of all’ idea doesn’t just come from admiration of the period in which many of the modern classics were born. The team at the barbershop also believe that providing their clientele with classics they recognise, complete with the stories behind them, creates a more relaxed and approachable atmosphere, as opposed to complicated craft cocktails.

“The concept of this year after the pandemic situation became ‘give the bar back to the customers’. After 10 months of closing for covid, we understood that the first thing we want to be is ‘open’ and let people enjoy the bar again. No rotavapor, no laboratory, less homemade, more vibes, give back the place to the customers. For this reason the concept instantly came as ‘classics first of all’.

We thought of making it a slogan. We explain this at the tables. We thought it was good to explain why we had less signature drinks, why we put the classics on the menu like 20 years ago. We want you to enjoy the bar, and the best way is to give you some classics, let you discover some new classics and chill.”

Cementing The Classics One Menu Page At A Time

The Barbershop team doesn’t just put classics on the menu and leave it at that. There is a strong sense of an educational journey to the work the bar does to spread the word of the cocktails that have led us to the current cocktail era.

“We have this page on the menu called the Brooklyn Saga, the concept is to show the customers the classic recipe, the Brooklyn of course, and then we have 4 modern classics on the page, the Red Hook, the Green Point, Besonhurst and Little Italy, with the names of the bartenders who invented it. This gives us the opportunity to explain to the customers what is a modern classic and why we should put it on menus all over the world.”

The stories behind cocktails are so important to the Barbershop team. They help the drinks come alive and cement themselves in the minds of the new generation of drinkers and bartenders alike. The team lives and breathes the old adage ‘every day is a school day’.

“If you think of the Naked & Famous, people know the Naked & Famous without knowing Phil Ward or Death & Co or the mezcal movement in New York. Why are you ordering a Naked & Famous? Maybe you saw it on Instagram, maybe someone else recommended it. But you should know where it was invented so you can know it is a 10 year old cocktail but it’s still here today. The next generations will call it a classic, not a modern classic.”

“If we don’t educate we are not doing our job properly. This is the kind of place where customers should learn something. When you leave you have to bring something with you. Just a name, the bartender and the name of the bar, and the year it was invented. If you want to know something more we can start from there and start to talk with you. But if you don’t give a fuck we’ll let you off without breaking your balls you know?”

Where Have All The Future Classics Gone?

The current day cocktail culture faces a problem, according to Roberto. The shift towards complexity and unique, unreplicable signature cocktails and the ever-changing menus of today is stifling the ability of future generations of bartenders to build on them in future eras.

“I think that it’s normal that there is an evolution of the cocktail as we learn from the past, but the new wave of how we think of the cocktail from four or five years ago until today, is something that I see like every cocktail looks the same. Today I see one cube of ice, all clarified, no garnish. Which is okay, but if you ask me if I’ve seen a new drink that could be a new classic in this way I would say no.

Today’s drinks are something very hard to replicate around the world. The trend is to do something that nobody else can do, but this means that the customer will not drink your drink anywhere except your bar, This is something good for your bar, but for the culture it’s not so good because we need new classics, we need new recipes to let the next generation study and to build on.”

While the barbershop doesn’t shy away from signature cocktails entirely, they are not given the same prevalence that many modern bars tend to give. Replicability and recipes you can take with you and spread around is the name of the game.

“If we make a new drink at the barbershop we do a lot of research, we do our work at the lab, we have many machines, but we are trying to do signatures that are hard to replicate in only 20% of our menu. It’s important that someone from, say, Canada, can ask for something similar to a Barbershop signature in a speakeasy in Toronto. I see tourists take notes of our recipes. It means you’re doing something that people who are drinking it really like. They want to bring the recipes with them and drink them again.”

Trends Tend To Recycle Themselves

All this being said, Roberto doesn’t think that he and his team are alone in this view that the craft cocktail movement might have peaked, or at the very least is getting close to critical mass. He is seeing more and more that a return to classics and a craft cocktail counterculture is developing, in Rome and around the world.

There are places that are working on the ‘anti-trend’, small realities that stop and say “I will not pre-batch cocktails, I will not buy thousands of euros of laboratory”. I hope the back to classics wave will grow. I see a lot of young bartenders that start to do this work without knowing the really simple classics. There are a lot of new books, webinars, classes, a lot of ways to learn, but we need more knowledge on this. I really hope the new generation will study from the classics to improve whatever they want.”

Modern Classics Are A Balancing Act

Getting cocktail culture back on track isn’t just about educating customers, says Roberto. Young bartenders need to understand not just the classic recipes, but what made them classics in the first place. By understanding this, they’ll be able to make cocktails with the potential to become modern classics that persist into future generations.

“I would tell them to first of all think about balance. A lot of bartenders are working on ‘how cool is the recipe’, ‘how cool are the ingredients you use’, ‘how much prep you did on a single drink’. If you can work for 5 hours on a single ingredient it’s okay, thank you for doing this. At the end though if you mix your ingredients in a wrong balance, all the work you did is lost. You did something that didn’t work.

For new drinks, it doesn’t matter if you have 2 ingredients or 10 ingredients, what’s really important is the balance between the ingredients. The balance is what improves the flavour of the individual ingredients. This is what makes your drink good for years to come.”